Premier League giants Manchester United and Tottenham Hotspur are both fighting in the race to sign England youngster and Fulham star Ryan Sessegnon ahead of the summer transfer window, according to report from the Telegraph. It has been confirmed that the England youngster will be parting ways with the London club this summer after the […]

JUST IN: Liverpool “Very Close” to signing £50m-rated European forward ahead of summer

Premier League giant Liverpool are being reported to be very close to agreeing a deal with German giant RB Leipzig over the signing of striker Timo Werner, who has told the club he has no intentions of putting pen to paper on a contract extension. The German striker, who joined Leipzig in the summer of […]

Heartbreak to Fans: Arsenal will lose another KEY FIGURE in the Summer: BREAKING

RB Leipzig are said to be keen on signing Arsenal star Emile Smith Rowe on a permanent deal this summer, according to reports from Calcio Mercato. The Gunners midfielder joined the Bundesliga club during the winter transfer window on an initial six month loan deal. The 18-year-old attacker recently returned from his grion injury right […]

“A proper shite, he should be dropped” – Fans react to Gordon’s performance against RB Leipzig

Scottish League holders Celtic F.C were beaten 2-0 at the hands of Bundesliga giants RB Leipzig last night. This loss will place Brendan Rodgers’men on high pressure to win their next game in order to remain in the Euro competition. Celtic were sloppy and not in one of their best days against the German side […] 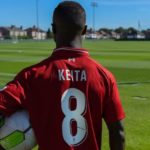 Liverpool have announced that Naby Keita will officially join the club from RB Leipzig on the 1st of July when his current contract expires with RB Leipzig. It’s been a long time the club have been in negotiations with the Bundesliga club over Keita signing but now it’s a done deal and he will be […]