Chelsea dropped their first points of the season when held to a 0-0 draw at West Ham United last weekend, but the Blues have been netting in goals on home turf.

The FA Cup holders have scored nine goals in wins over Arsenal, AFC Bournemouth and Cardiff City at the Stamford Bridge and Liverpool should be very worried about this clash.

Eden Hazard scored a hat-trick in the last fixture here against the Bluebirds and his wonder-strike settled the 2-1 midweek triumph at Anfield.

“He is getting better and better. He is doing the right things at the right moment and in a wonderful way.”

Looking at the Chelsea vs Liverpool betting odds, there is obvious appeal in 8/5 for Hazard to cause havoc at Liverpool defence at any time again this weekend.

That being said: here is how we think Maurizio Sarri will lineup his team against the Merseysiders.

Willy Caballero showed an excellent performance between the sticks in midweek against Liverpool, but being a crunch Premier League fixtures, Kepa Arrizabalaga is expected to make a return back in goals on Saturday.

Chelsea’s defence will be one of the key factors to determine their victory over Liverpool this weekend and we are backing Sarri to make changes to his defence as Gary Cahill should make way while Emerson Palmeiri is also set to drop out despite his important equaliser against Liverpool. Andreas Christensen is a major doubt for the game this weekend after limping off at Anfield on Wednesday night.

David Luiz and Marcos Alonso are expected to return to lineup after being rested in the League Cup against same opponents while Antonio Rudger is likely to recover from a minor knock and return to keep his place at the heart of defence. Without any doubt, Cesar Azpilicueta should get nod ahead of Davide Zappacosta at the right-back.

Cesc Fabregas should return to the bench after earning his first start of the season against Liverpool and this will see Jorginho returning to lineup after being given a rest in midweek.

N’Golo Kante will also make a return back in to the side following his well-earned rest so Ross Barkley will also return to bench while Mateo Kovacic should shake off a knock to keep his place in midfield.

Eden Hazard came off the bench to score a stunning winner against Liverpool in the Carabao Cup and he’s certain to keep his place in Sarri’s eleven this weekend. The Belgium international is also 8/5 for Hazard to find the net once again this weekend.

Pedro remains a doubt with a shoulder injury that’s kept him out of recent Chelsea games so Willian is expected to keep his place in attack with Victor Moses the man to make way.

Leading the attack, it will be interesting to see who Sarri choice is but most odds are backing Olivier Giroud to make the lineup to lead the line after being rested in midweek with Alvaro Morata dropping to the bench.

Here is how we think Chelsea will line-up: 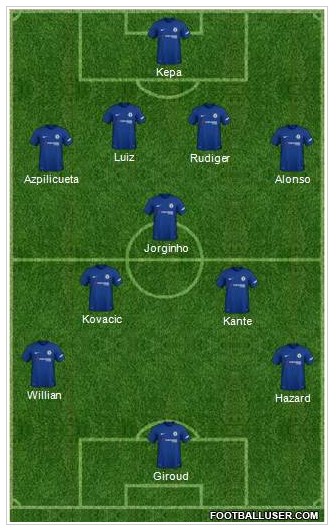