What Luis Figo Net Worth is in 2020 – Football Hitz

Luis Filipe Madeira Caeiro Figo is a retired professional football player, who dominated the football world in his long stay in the Spanish La Liga during his early football days. Due to his success and the high number of trophies he lifted in Spain, he was depicted as a La Liga legend. He began his football career with Portuguese club Sporting CP, before spending 10 years in Spain, where he played for both Barcelona and Real Madrid before finally hanging his boots with Serie A giants Inter Milan. Before talking about Luis Figo’s net worth in 2020, we will first take a brief history of his football career and how his worth came to be.

Figo was brought into this world as the only child of Antonio Caeiro Figo and Maria Joana Caeiro on the 4th of November 1972 in Almada, Portugal. He discovered football to be a favourite hobby of his at a young age as he joined U.F.C OS Pastilhas as a street footballer. Not long after that, he was recruited into Sporting CP academy where he began his junior football career at the age of 12.

Figo began his professional football career with Portuguese giants Sporting CP, where he made his league debut from the bench for teammate Marlon Brandao in a 1-0 home victory against Maritimo in April 1990. In the following season, Figo claimed his first goal for the club in a match against Torreense, helping his team equalise the match as the game ended in a 2-1 win for his club. Due to his impressive display in the 91/92 campaign, he was called into Portugal’s senior team in 1991. In his four campaign, playing like a first-team player, with Sporting CP, he was able to lift the Portuguese Cup before moving on with his career to Spain.

The retired-Portuguese winger joined Spanish club Barcelona from Sporting CP in a fee reported to be £2.25 million. This is when Figo’s career took a massive u-turn to success with the Catalans. Spending five years with the Spanish giants, the Portuguese star was able to win seven trophies including UEFA Cup Winners’ Cup, UEFA Super Cup, two La Liga titles, two Copa del Rey, and one Spanish Super Cup. He was part of Barcelona’s formidable attack that included both Patrick Kluivert and Rivaldo. He registered 249 appearances for the Catalonians scoring 45 goals and further providing 51 assists in the process.

Luis Figo was then sold to Barcelona bitter rivals, Real Madrid in the summer of 2000 for a then-world record fee €62 million. He later won the Ballon d’Or in November 2000. On his debut season with the Los Blancos, Figo helped the team lift the 2001 La Liga title scoring 14 goals, which was later pivotal in winning 2001 FIFA World Player of the Year.

Just like in Barcelona, Figo also spent five seasons with Real Madrid helping them secure seven trophies including two La Liga titles, two Super Cups, one UEFA Champions League, one UEFA Super Cup and one Intercontinental Cup. He was able to find the back of the net 56 times and providing 93 assists in 245 appearances in all competitions for the Spanish giants. His transfer fee from Barcelona to Santiago Bernabeu played a part in Luis Figo’s net worth.

In the twilight of his career, Luis Figo signed for Serie A giants Inter Milan following the expiration of his contract with Real Madrid. He spent four seasons with the club, lifting four Serie A titles, one Coppa Italia and two Italian Super Cup. He registered 11 goals and 29 assists in 141 appearances for Milan in all competitions. In his last season with the club, he announced his retirement from football. 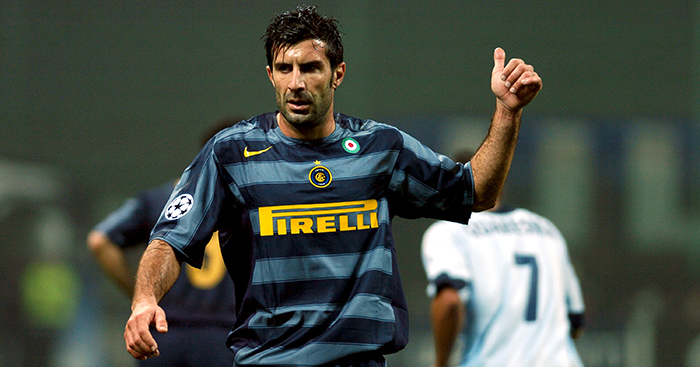 Figo was able to represent his country Portugal in international competitions from under-16 to the senior levels. Playing a pivotal role in the junior team, Figo won the FIFA World Youth Championship in the same year he made his senior debut for Portugal in a 1-1 friendly match against Luxembourg in 1991. He bagged his first goal in a match that ended 2-1 against Bulgaria in November 1992.

The retired winger helped his team to the final of 2004 UEFA Euro but was unable to get past Greece to lift the trophy. The match ended in a 1-0 defeat with striker Angelos Charisteas scoring the only goal of the match. He also led his national side to claim the fourth position at the 2006 FIFA World Cup held in Germany.

He represented Portugal in 126 matches scoring 32 goals and 22 assists for the senior team.

Thanks to several lucrative deals he signed during his football career, Luis Figo net worth has been calculated to be $50 million. He had major endorsement deal from Nike, appearing in a commercial for the Sports Kit. He appeared in the EA Sports FIFA video games series as he was named in the Ultimate Team Legend in the FIFA 14 game. He also appeared in the Konami video game Pro Evolution Soccer for 2016 as one of the new myClub Legends.

He runs an upscale bar in the southernmost region of Portugal. He is also an ambassador for the Stop TB Partnership that fights against tuberculosis, a board member in the Inter Campus charity project. He also founded a private networking site for Professional football named Network90.

Luis Figo is married to Swiss model, Helen Svedin, with three daughters named Daniela, Martina and Stella. He has an owned house in Sollefteå, Sweden.